The 4 founding members of Electric Monk had been playing in various bands since late 90s, and finally came together and formed Electric Monk in summer 2004 in Helsinki, Finland. All guys were disappointed in the state of the music at the time and wanted to bring the groove back to rock music.

In years 2004-2006 Electric Monk played dozens of gigs at Finland's sleaziest venues and released 3 EP's ("...heavy & HOT!", "And Pass It Around!" and "Wake Up The Neighbours!") that received rave reviews in Finnish music press (RIP) and blogosphere (RIP).

In 2007, Electric Monk was joined by an old friend, Ville Nissinen (trombone & mandolin), and later that year the debut album "Hair of the Dog" was released. The band continued playing gigs around Finland at the pace of 50 concerts per year. In 2009 it was time for something else: Electric Monk played an acoustic concert tour and recorded a five-song acoustic EP. 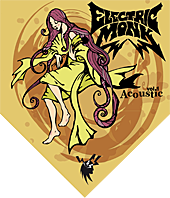 In June 2012 Electric Monk started a song-per-month project, lasting until March 2013. Ten songs were recorded and produced by the band itself and released at SoundCloud.

In 2013 Ville asked Topias and his childhood friend Jaakko Markkanen to join him in forming an old-school reggae vocal harmony group which was later named Polkuharmonix. They had some exceptional magic going on, and Electric Monk was put a little bit aside for the moment. Aleksi, Lauri and Ilkka also got into other band projects.

In summer 2014 Polkuharmonix was finishing it's debut album (only the trombones and vocals were not yet recorded) and Electric Monk started getting ready for the band's ten-year anniversary concert on 8 August in Semifinal, Helsinki. There were plans to record a new Electric Monk EP later that year, but everything was changed dramatically shortly after the concert.

On a cold and rainy autumn evening tragical news were heard: Ville had been found dead in Raahe, Finland. Ville had been playing trombone on another band's concert tour and had drowned early in the morning hours of 6 September 2014 after the Raahe concert.

Luckily, there existed enough of Ville's vocal recordings from Polkuharmonix's rehearsals, and the album could be finished. "Triangeli" was released at Ville's memorial concert on 31 March 2015 at Tavastia-klubi, Helsinki. After "Triangeli" was finished, Electric Monk headed back to the rehearsal room. New songs were polished and a studio was booked for October 2015. Unfortunately the plans changed again: Aleksi broke his kick drum leg skateboarding in Sweden in August 2015, and the studio and all the autumn's gigs had to be canceled.

New studio was booked for April 2016. Three songs were recorded with Tero Rikkonen (who also recorded "Hair of the Dog" and "...and pass it around!") at Äänivallila Studios. The EP "Humble Machine" was released in May 2017. In summer 2018 sound engineer and musician Janne Mikkola approached Electric Monk and asked if we'd be interested in recording a new EP. Again, three songs were recorded in Lahti in September: "Raise Your Glass", "Rebound" and "Roadkill Bar".

In spring 2019 the band met at Aleksi's home and discussed the future. It soon became clear that the band's flame had all but burnt out. After a 15-year long strange journey, the band decided to break up for indefinite period.

Electric Monk's final concert will be on 6 September 2019 at Semifinal, Helsinki. The new EP will be released in August before the final gig.

Hair of the Dog
album cover